You are here: Home » About Bulgaria

Bulgaria is situated in southeast part of Europe. It is a country of medium size with a territory of approximately 111 000 square km among the 50 European countries. Bulgaria has been a member of the European Union since January 1st, 2007.

The turbulent thousand-year old history, the great European Cultures that have flourished throughout the Bulgarian lands, the marvelous nature and rich fauna, the variety of traditions and peoples – these are some of the reasons why а roundtrip of Bulgaria is a significant, entertaining and unforgettable experience.

A glimpse of the Bulgarian history: 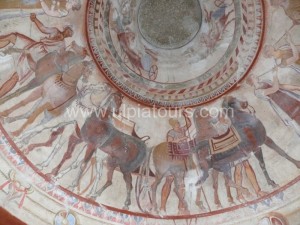 The "beehive" tomb is one of the most remarkable monuments of the Thracian culture in Bulgaria.

Three millennia ago Bulgaria was inhabited by the Thracians. The most ancient architectural monuments from the time of the early Thracians are the megaliths in the East-Rhodopi Mountains. Numerous dolmens, rock niches, tombs and temples have been dated back to IX – VI centuries BC. The largest rock megalith found so far is Perperikon – the Temple of Dionysius.

The flourishing state of the Thracian culture during the pre-Roman Iron Age (VI century BC – I century AD) marked the country with fabulous architectural monuments. Very impressive are the frescos covering the beehive tomb in Kazanlak and the tombs in Alexander and Kosmatka villages. Recent excavations have revealed numerous domestic goods and amazing gold treasures (masks, rings and ornaments) – masterpieces of the goldsmith art from that time. The strong cultural exchange and the presence of the Romans and the Hellenes in the today’s Bulgarian lands have left their mark on the Bulgarian history and on the cultural-historical heritage of our lands. The following sites should be mentioned as well-preserved representatives of that time: the Roman amphitheater in Plovdiv (Trimontium), the ruins of ancient Serdika, Villa Armira, Ulpia Oescus as well as the archeological finds from the Hellenistic period in Nessebar, Sozopol, etc. 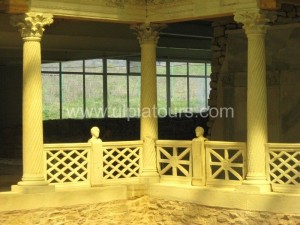 One of the largest Ancient Roman villas with rich marble decoration and complex floor mosaics.

The ancestors of today’s Bulgarians are the Proto-Bulgarians, who have come to the Balkan Peninsula from Mid-Asia. Their kingdom, Great Bulgaria, has been built on the concept of free people society and solid principles, such as justice, respect to their fellowmen and slavery rejection.

In the year 681 Khan Asparuh won the territory along the Danube delta and together with the Thracians and the Slavs proclaimed the New Bulgarian Kingdom with capital Pliska. The mighty military organization and the discipline in the Union (Bulgarians, Slavs and the other local tribes) led to the foundation of the first medieval state in Europe.

In the IX century the Bulgarian people won a uniform identity – the Bulgarian nationality. Thus the First Bulgarian Kingdom became one of the three largest European monarchies. A great contribution to that made: the adoption of Christianity as prime state religion, the gaining of independence of the Bulgarian Church as well as the measures taken for the preservation and protection of the Slavic literacy and culture.

In the beginning of XI century Bulgaria fell under Byzantine slavery. On gaining back its sovereignty in 1186 Bulgaria underwent even greater political and cultural upsurge. In the period XII – XIV c. the Bulgarian state dominated throughout whole Southern Europe. This is called the period of the Second Bulgarian Kingdom. In 1278 the then Bulgarian Tsar beat back the attacks of the Tatars and saved not only Bulgaria but whole Europe from the severe Tatar invasion, which had already mercilessly routed China, India, Russia, Poland and Hungary. On Bulgarian territory the Tatars were defeated, crushed and banished. 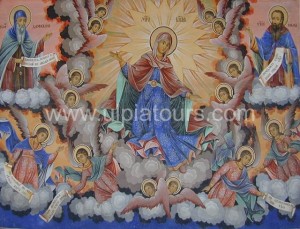 Rila Monastery is the largest Eastern Orthodox monastery in Bulgaria. It is one of the UNESCO World Heritage Sites in the country.

Unfortunately a millennia later the Bulgarians and the other Balkan states (Byzantine Empire, Albania, Serbia, Walachia and Moldavia) were unable to withstand the new Islamic invasion – that of the Ottoman Turks. The Ottoman army reached the walls of Vienna and Venice and the western part of the Old Continent paid with lots of blood and money for its freedom. Thus came 1396, when the last Bulgarian fortress fell under the Islamic rule. For almost 500 years the Bulgarian people have been forced to live in an ethnically and religiously foreign world. Nevertheless the Bulgarians managed to preserve their Christian religion and their national consciousness through the though 5 millennia. In the year 1878 the Bulgarian state was restored and the Bulgarian people entered the new European history as a free and sovereign nation.

In the end of the XIX c. Bulgaria enjoyed a new period of upsurge. The dramatic events in Europe during the first half of the XX c. led to the establishment of the socialistic regime, which has dominated in Bulgaria for more than 40 years (1944 – 1989).

Bulgaria has been a member of the European Union since January 1st 2007.