You are here: Home » Cultural and Historical Tours » Archaeology in Bulgaria

From Paleolithic to the Bronze Age 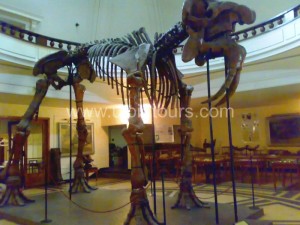 The earliest remains from humans on the territory of Bulgaria are dated as far back as the Old Stone and New Stone Age or Paleolithic and Neolithic. The discovered stone tools, flint edges, bones of wild animals, fireplaces and tumuli (mostly in the mountainous areas and at the Black Sea coast) give proofs that our lands have been inhabited since prehistoric times.

The Copper Age (Eneolithic) is represented by the stone paintings in Magurata cave, tools and objects made of stone and copper, as well as by the Golden treasures from the Varna necropolis - the oldest gold treasure in Europe. Actually, these finds are exhibited in the archaeological museums in Sofia, Varna, Plovdiv, etc. Some of them can be seen on spot, because they are exhibited in old dwellings from the Eneolithic period. In the Yagodina gorge you can visit such dwelling where you will see the summer and the winter hearth, the “bedroom”, the “ventilation” of the people from that time. Another site is the Eneolithic dwellings in Stara Zagora showing the way of life in the past – the two best preserved ancient dwellings in Europe.

During the Bronze Age stone was replaced by bronze. The most impressive find from this period is the Golden treasure of Valchitran (found in the vicinity of Pleven). It consists of 13 pieces and weighs a total 12 kg.

According to the expert opinion of the scientists, one of the oldest and most interesting archaeological find in Bulgaria dates back 10 million years ago. This is the skeleton of a Deinotherium, found in the vicinity of Assenovgrad. Presently, it can be seen in the Museum of paleontology at Sofia University. 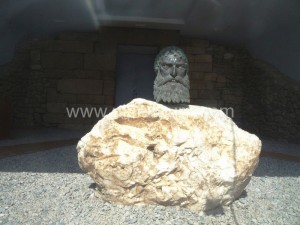 The Thracian people has left us a very rich heritage. The numerous tombs (Goliamata Kosmatka, Sveshtari, the burial tombs in Kazanlak and Aleksandrovo), the temples (Perperikon, Tatul, Belintash, Begliktash) and the cities (Kabile close to Yambol, Sevtopolis – see Lake Koprinka) testify for the rich culture of the Thracians and for their strong believes in various gods. The tombs are richly decorated with wall paintings and reliefs, which are presently very well-preserved. The paintings in the Kazanlak tomb depict the earthly, military and the hereafter life of the king which has been buried in this site. Another famous Thracian Tomb is the Sveshtari Tomb near Isperih. With its finely carved statues of women and rich wall-paintings on the dome, it fills the tourists with admiration. The golden and bronze items discovered in the tombs, such as masks, ornaments, services, military equipment, etc. impress with exquisite and at the same time very complex design.

The Romans and the Byzantines 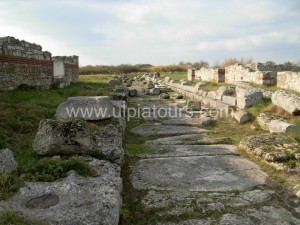 The Romans were famous for their unique construction technology. Proof of this are the Thermae in Varna, where the walls were designed in such a way so as to isolate the cold draughts. At the same time there was also a heating-system connected to all parts and rooms of the building. We must certainly not forget the old Roman cities: Nicopolis ad Istrum, Nicopolis ad Nestum, Marzianopolis, Saksaginta Prista, Nove, Ulpia Oescus etc. For the Bulgarian archaeologists they are a rich source of information about the way of life of the Romans. After the fall of the mighty Roman Empire and the foundation of the Byzantine Empire, began the construction of fortresses. Many fortresses in Bulgaria are dated back to this time: Belogradchik, Mezek, Karlukovo, Archar, Patmos and others. The remains of the basilicas in Lovech, Varna, Peruschtitsa also remind us of the Byzantine Empire. From the same period is the St. Sofia basilica – the second oldest church in Sofia, located in the heart of the Bulgarian capital city.

The Bulgarian state during the Middle Ages 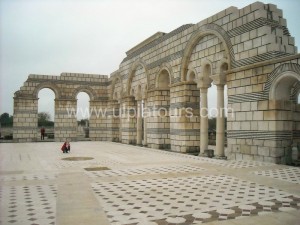 From this period are dated the old Bulgarian capitals Pliska and Preslav, as well as many fortresses, such as Cherven, Baba Vida (the only completely preserved medieval castle in Bulgaria), Tsarevets (the main fortress of the then capital city – Tarnovgard) and others. They tell the story about the glorious past of the Bulgarians, about battles and way of life, about one nation struggling for independence and defending its values.

This is only a small part of the rich Bulgarian heritage. At your desire we can offer you a tour focusing on certain period of the Bulgarian history (Thracian, Byzantine, Bulgarian Revival) or tracing the development of the Bulgarian state (e.g. The old capitals of Bulgaria; Bulgaria during the Thracians; Bulgaria and Byzantium, etc.)

Contact us and we will create for you a customized offer that can satisfy your request by meeting all your requirements.